Interview Jordi Borràs by Jordi Pujolà, Catalan writer in Iceland. With the support of Icelandic Mountain Guides. 15% discount on the excursions code ESCRITOR2019 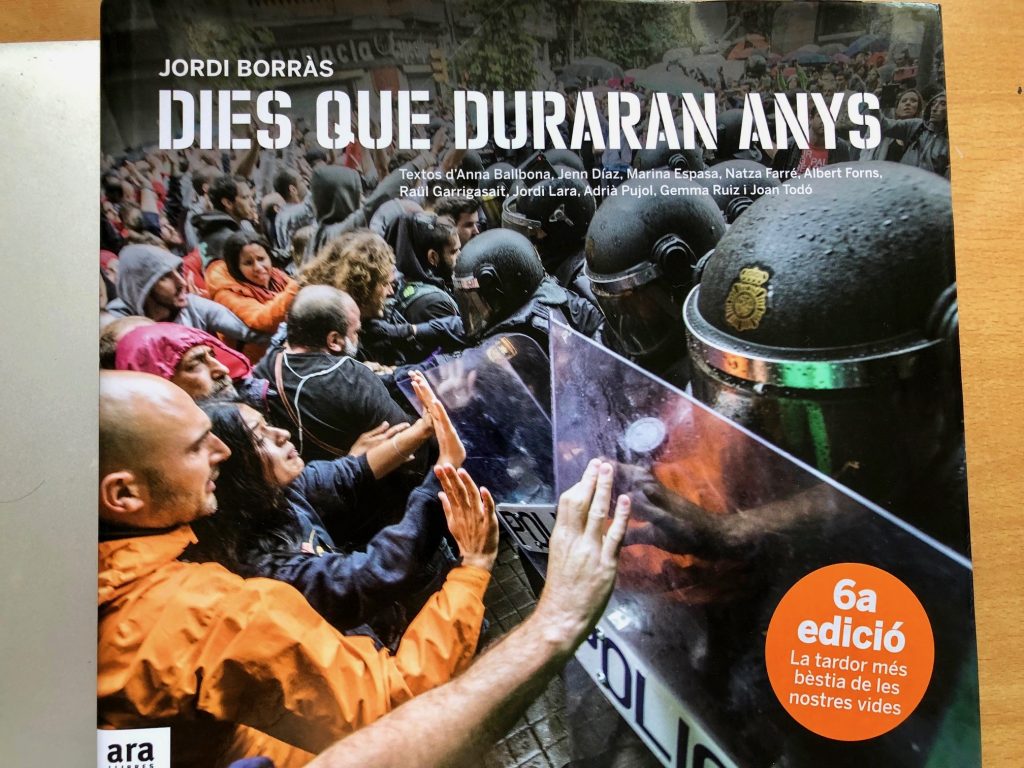 The original interview was entirely in Catalan.

14th October 2019: Nine Catalan politicians have given prison sentences from 13 to 9 years. The situation in Catalonia is very serious. Many citizens are fighting the police on the streets of Barcelona and other cities of Catalonia. Please help.

Today, July 18, 2019, about a year ago, a policeman dressed as a civilian attacked the Catalan photojournalist Jordi Borrás on the street. He will explain it here

He was leaving L’Ateneu Barcelonés, ​​the same place where we are this morning of heat, on the terrace, near the pond, and surrounded by birds that put the soundtrack to this interview

Jordi Borràs enters the garden discreetly, with his jeans, his striped shirt and sits at my table. He is a guy who could go unnoticed in any square in Gracia, his neighbourhood

His last photo book Dies que duraràn anys (Days that will last years) Ed. Ara Llibres, about the Catalan referendum to become independent from Spain and brutally repressed by the police, is a best seller 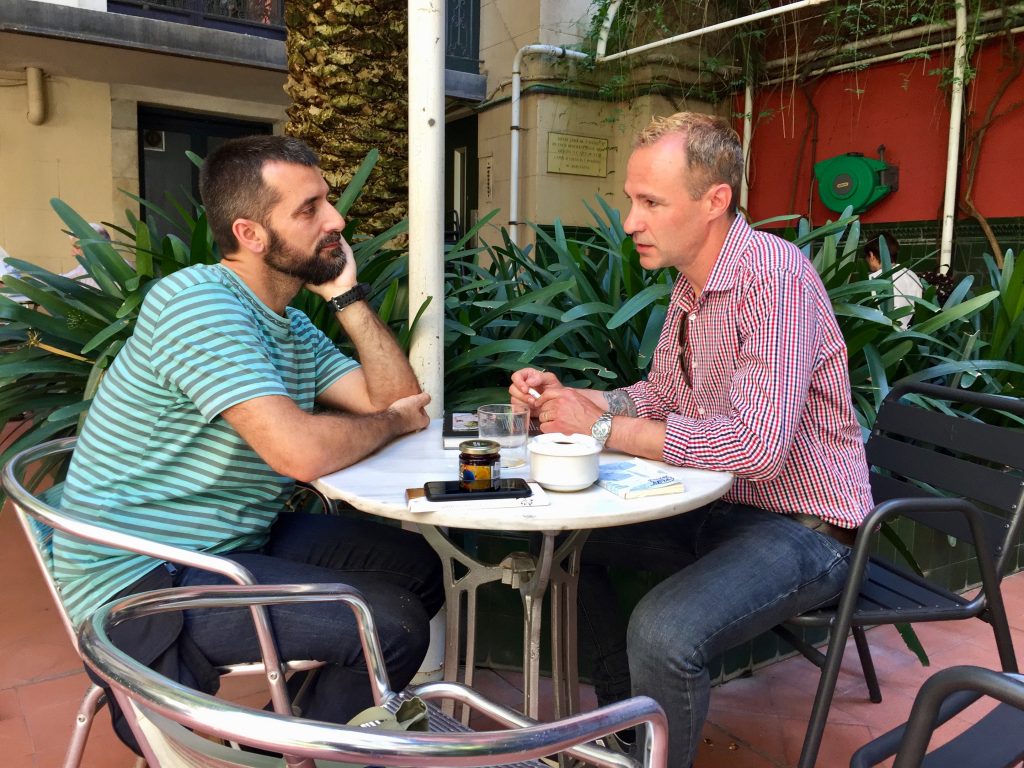 First of all, Jordi Borràs (Barcelona 1981) is an independent photojournalist specialized in cases related to fascist groups and Spanish nationalism. A dangerous profession in the currently times in Catalonia

Second, Jordi Borràs began studying illustration at the prestigious Massana School, but he soon discovered photography was his thing 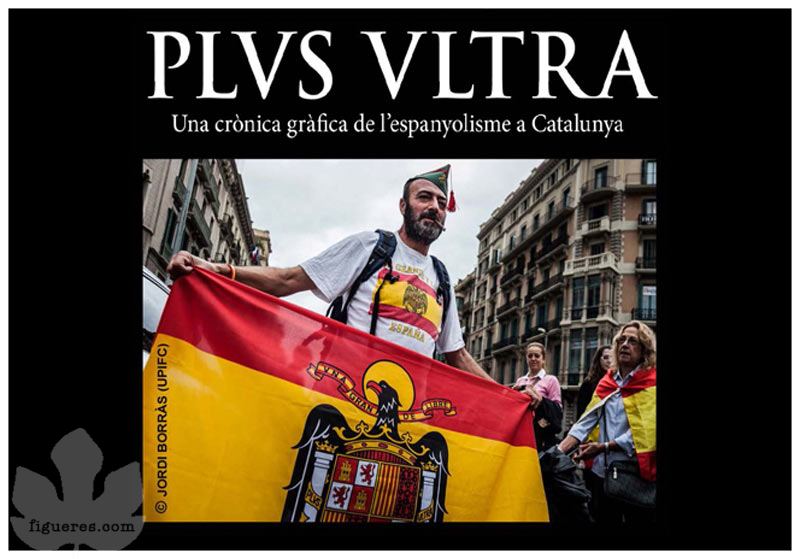 «First I worked who I could with and now I work who I want with. I usually collaborate with independent digital media»

«After the crisis, the paradigm changes, digital media takes advantage over classic newspapers

Who today he gives more value to a paper media rather than another digital is that he has not understood how the market works. In fact, the paper has remained obsolete 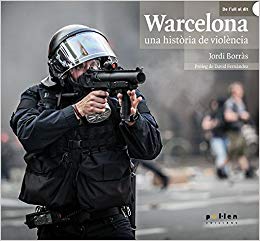 However, I still love books (my father is a publisher) and printed pictures»

Do the traditional newspapers distort the news according to their interests?

In addition, the deal with independent media is more direct and humane »

Regarding that, something similar the famous photographer Kim Manresa told me

«The research raises many questions about what happened on August 17, 2017» 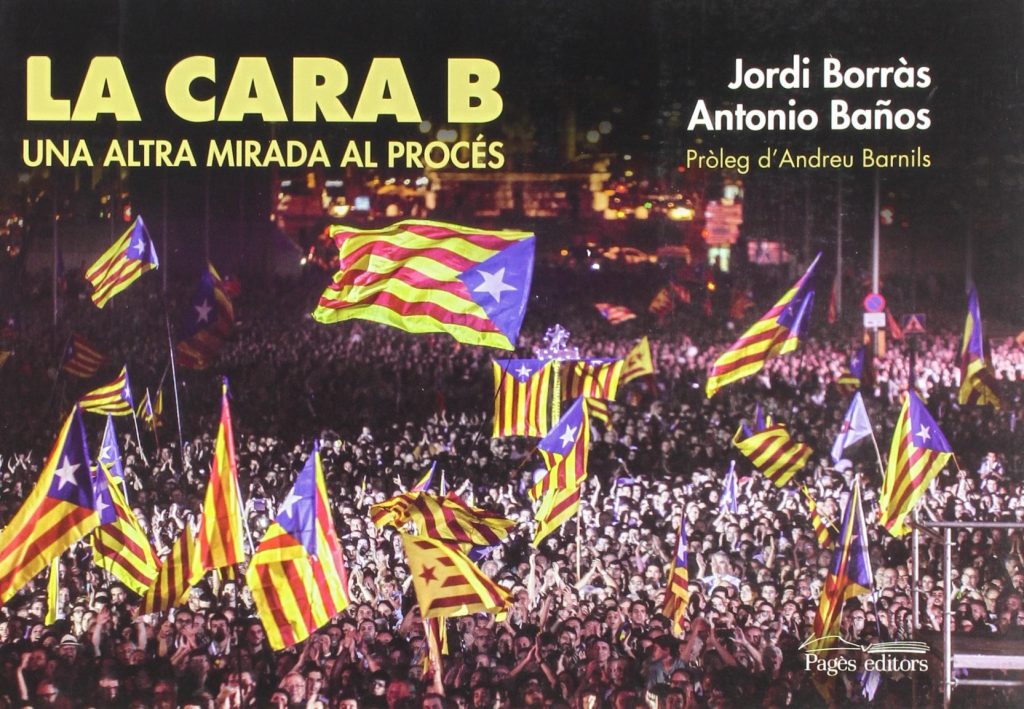 What happened in Las Ramblas?

«The newspaper Publico is recently revealing very important information regarding the terrorist attack. The brain of the attack, the imam of Ripoll, was a informer of the CNI (Spanish secret service) for many years

Namely, the terrorist phones were intervened for at least 5 days before the attack. To make matters worse, the CNI  helped Abdelbaki es Satty to be the imam of the village Ripoll and avoided his extradition (he had been imprisoned for drug dealing) on ​​condition that he collaborated with them 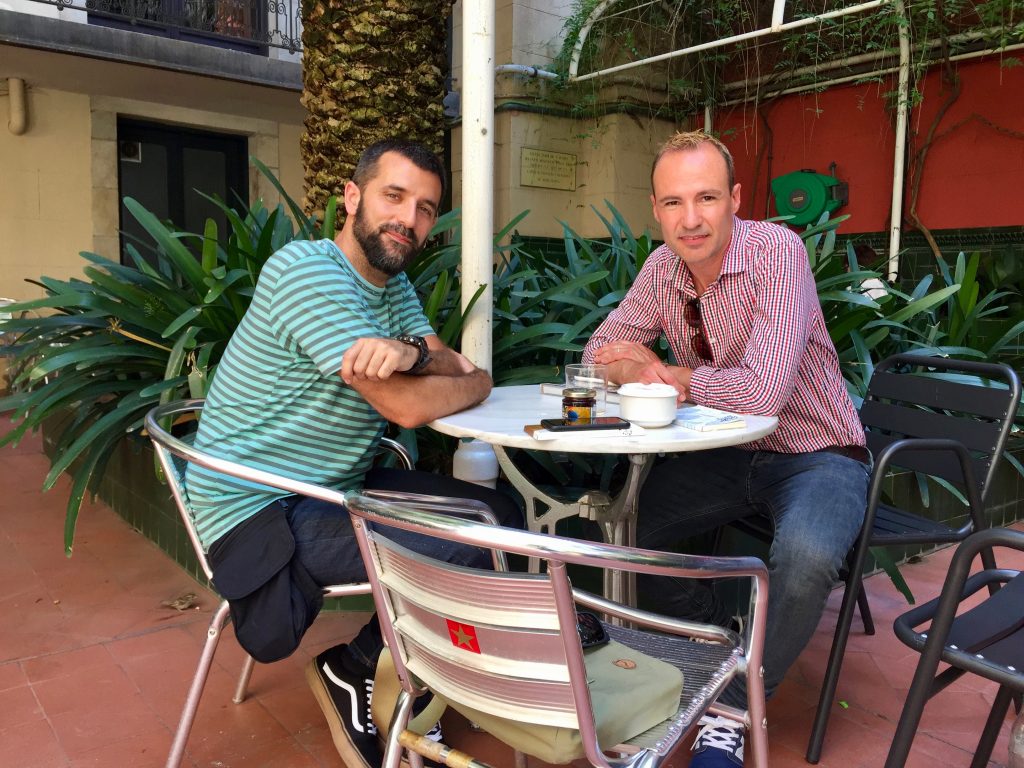 All in all, it is soon to draw conclusions; but at least it is a case of huge negligence because there are internal CNI documents that prove it. So information has been hidden from the citizens and the government does not know how to answer these questions »

The investigation is ongoing

«A person I didn´t know shouted at me on the street: Viva España! Even though I didn´t pay attention to it, he followed me, approached me and repeated Viva España! and viva Franco!

Then he hit me, that guy knew how to hit well. When he had me on the floor, I instinctively asked for the police. Then he replied: I am a policeman! 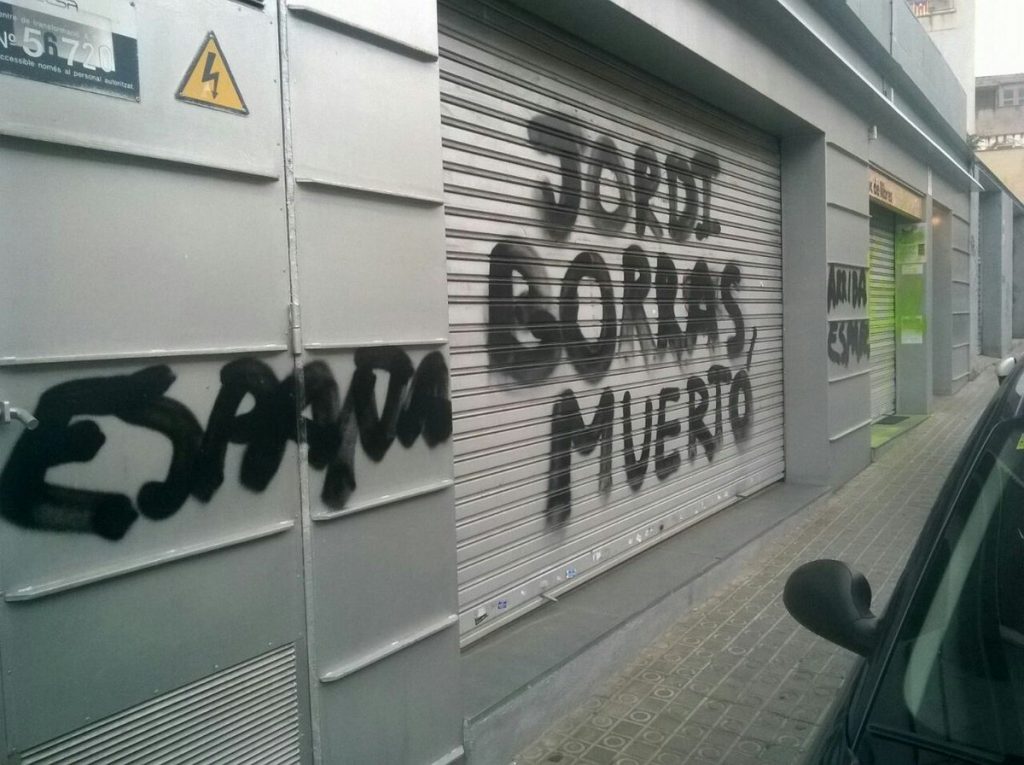 Fortunately, there were some neighbors from the area who saw everything. Thanks to their testimony, I am not now in jail because he later had the nerve to report me as if I had attacked him »

Interview Jordi Borràs. Why do he hit you?

What politic parties are you investigating?

«Many like VOX that has come out of marginalization, but the spectrum of my research is much broader»

Do you think it makes any difference a Spanish government from PP (right wing) or PSOE (left wing) for Catalonia?

«I think there will be no change. The PSOE (Pedro Sánchez) would do the same as PP (Mariano Rajoy) if necessary»

«For example, in the 80s the socialist party was responsible for the government’s dirty war against ETA, with the GAL formed by Italian, French and Algerian policemen and far-right mercenaries 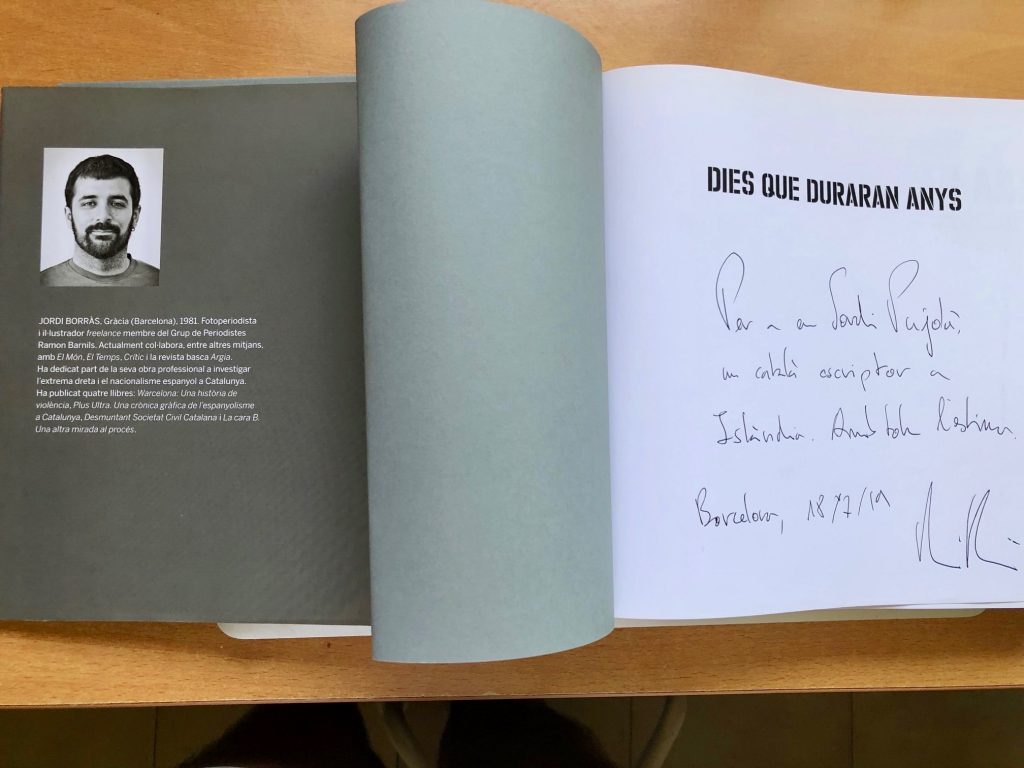 In fact, the PSOE and PSC (Catalan branch) have been demonstrating for the unity of Spain with VOX, National Democracy, La Falange Española… on the streets of Barcelona in autumn 2017

In conclusion, both parties have in common to guarantee the unity of Spain above all »

Why the Catalan parties don´t agree on a common project?

«To begin with, it is a complicated matter. Imagine Catalonia and Spain are fighting a boxing match

The first round, the 1st. October, the referendum was won. Despite it caused a national trauma because the police hit the people to prevent them from voting

The second round, the general strike of 3th. October was also won (very important) and then later there were a series of technical chaos until the only way out, after seeing that the Spanish government would not negotiate, was the unilateral declaration of independence of the 27th. October 2017

In other words, the world need to know that Catalan society is suffering from severe repression

Nevertheless, independence in Catalonia is a quite new phenomenon that have begun increasing exponentially since 2012. Which means that it is also immature and has taken by surprise the independence parties, which have also their own interests (the CUP, ERC, Junts Per Catalunya (Puigdemont)…)

Thus, during the fall of 2017 shared interests could be agreed, but today there is no horizon as the one on the day of the referendum, so they are a bit lost …

However, I am not worried, it´s just a matter of time»

Interview Jordi Borràs. Is not an agreement to Spain the key of the problem?

«I don’t think the government wants to give anything until it has no other choice
The Spanish government won´t offer a referendum as the much more intelligent British one offered the Scottish and won it
In the Spanish case, the history and the old imperialist tradition of the State shows that Spain does not negotiate or give up until everything is lost
In the case of Cuba, autonomy was offered when independence was already a fact (1898). Spain prefers to step on and annihilate rather than negotiate, therefore, the dream of an agreed referendum is less likely than unilateral independence
What is evident is that there is a correlation of forces between a  State (Spanish) that has an army, police, judicial power, executive power, etc. and a nation as Catalonia that has its powers subject to the power of that State. As a consequence, if Catalonia plans to become unilaterally independent, the Estate´s court sweeps it from the face of the earth, what is what is happening now »

In short, independence in Catalonia has grown up due to the refusal of the Spanish State to negotiate and understand that there are people who want to live in their own way the fact of being Catalan

To summarize, the Spanish State have considered the Catalans second-class citizens for many centuries and now we are tired

Spanish imperialism has been losing territories for 400 years, which shows us that the empires are cyclical and the State is the victim of its inability to accept different ways of thinking»

How will this end?

«Nobody knows. The boxing match continues and will  last as long as it has to last»

Many years ago the only big party that supported officially the independence was ERC and they were seen like weirdoes. Don’t you think that many parties and politicians have now signed up for the independence because it gives votes?

«Well, I am pro-independence since I was a child, but now there is a catharsis in the independence movement

The important thing is that there has been a change in the Catalan society that will be difficult to reverse, because the bulk of current independence is formed by people who a few years ago were not supporting the independence and believed that a deal with Spain, a reform of the State, was possible; but now these are the most pro- independence  you can find because they know that what they had been promised is a sham

On the other hand, at this point in the movie, being independent is not easy or cheap

The State has already charged a thousand people

Consequently, if you are pro- independence you are suspected of crime and aware of the risks involved

Imagine, you can go to jail just for the way you think»

«For example, Jordi Sánchez and Jordi Cuixart who are 2 social pro-independence (non-political) leaders have been in jail for 2 years. Neutral and international observers (UN) have repeatedly asked for their release because of his status of political prisoners. This obstinacy of the State is what causes that there are more and more pro-independence people »

Iceland is worried for Catalunya

«Liking is reciprocal (shows a frank smile). Iceland generates interest, we even have a very good radio program called Islandia

Iceland  has been part of our cuisine for many years: the cod of Iceland!

As Iceland achieved total sovereignty over Denmark recently (1944),  they can understand our situation very well »

Why do the Catalans want the independence?

«The Catalans all we want is to be free, sovereign and governed by ourselves. We do not want to be more than others, but not less »

Interview Jordi Borràs. How are the Catalans?

«Catalonia is an open, multicultural and tolerant country. Due to our privileged geographical situation in the Mediterranean, it has always been a place of trading; countless cultures have lived together in peace and have enriched each other

For that reason, ours is not a movement focus on seclusion and intolerance as the Spanish that tries to block other cultures among its kingdom

In conclusion, the only condition of being Catalan in Catalonia is wanting to be that. And you can be Icelandic and lead a program on TV3 (Television of Catalonia). For example, Halldór Már. Actually we consider him as a Catalan

To summarize, Catalan is an open and respectful society with other cultures»

How do you manage to take so good pictures in so situations of pressure and violence?

«The key is to be there, stay informed of the political news and to know when, where and who calls the demonstrations to be able to predict whether it will be a quiet or violent one with the police or opposing ideology groups, etc.

In short, experience helps you to sense the character of the demonstration

As the photographer Kappa used to say: if a photo didn’t work out, it’s because you weren´t close enough

In addition, my favorite objective is a 35mm that is an angle that forces you to be within the action

Therefore, if there is a police charge, it forces you to be on the line between demonstrators and the police. Of course, you might be hit now and then: occupational hazards

Interview Jordi Borràs by the Catalan writer in Reykjavik