Carmen Posadas interview is an article by Jordi Pujolá, Spanish writer in Iceland

She is a very respected woman and writes articles on magazines, newspapers and shows up frequently on TV

Carmen Posadas lives in a restored regal building. Inside her house, each piece of furniture fits perfectly with the paintings, tapestries and carpets

Carmen Posadas sat down in front of me, crossed her legs elegantly and we started talking

How is Carmen Posadas?

Carmen is a cheerful, affectionate and intrepid woman

By the way, we interchanged signatures on our last novels, but of course she is much more famous than me

Carmen says there are 2 types of writers, the lame ones, who need crutches (plan everything before starting writing) or the blind ones (have no idea what are they going to write) 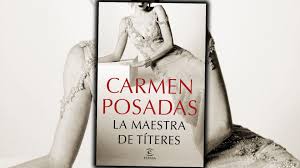 «When I started my last novel (La maestra de títeres), I only knew I wanted to  pay tribute  to William Thackeray, the author of Vanity Fair, and explain the evolution of Spain since the fifties to now on the voice of 3 women

I only had the first sentence of the novel, Last night I killed my mother and I didn´t feel anything, then I started the story and the development of the characters

However, the book was already written in one part of my mind, I just needed to remove the excess»

Nevertheless, it took some time for her to start writing novels for adults because as a good artist she felt insecure. In the meantime, she wrote down successful humorous essays and even coined a psychological term, the Rebecca´s Syndrome, that refers to the ghost of a past love

Carmen Posadas was born in Uruguay, her father was Ambassador. She moved to Spain in 1965 and got married in Moscow (Soviet period), then she went to London and ended in Spain again

Why do you write?

Carmen: «I write more for my drawbacks than for my advantages: When I was little, I was very shy and my sisters were bright both physically (blond and green eyes) and character (always singing and making jokes), so I used to go to my room and write a long a sad journey

On the other hand,  shy people are more observant because we don´t participate in the action»

How did you deal with changing country every 4 years?

«For me it was really good, a kind of chance to start again: I´am not going to be so shy, I´ll be kinder, I´ll have more friends… It was like an incarnation

In conclusion, when you change country, the person changes as well»

By the way, the nomadic life of the diplomatic people inspired her to write (with her brother Gervasio) a funny book named Today caviar and tomorrow sardines, because one day you eat caviar with the Queen of England and another a sandwich of sardines in a remote office

Writing is a lonely act, so you need help

On other matters, Carmen started up a writing school on the Internet with her brother (Yoquieroescribir) 8 years ago, they have more than 5000 students around the world and she is proud of it because many of them have already published a book

«Writing is a lonely job and you need help, it´s something I missed when I started»

What is the difference with other schools?

«The writers who are in charge of the other schools usually don´t give the complete recipe, like the famous chefs

However, in our school we reveal my tricks but also Hemingway´s, Dicken´s (her favourite because combines literature for intellectuals and common readers) …»

Carmen Posadas admits she has copied many tricks from Charles Dickens

The book market is all about women (professional and readers)

It looks like women read and men watch football

«I have been asked many times about the difference of women and men writing, but when I asked the same question to Mario Vargas Llosa, he surprisingly confessed it was the first time someone asked him that

Personally I think there are many factors involved on the process of writing: the religion, the country… and of course, the sex

On the other hand, currently there are many women writing black violent novels with a great success, but with a different approach

And of course, women and men are interested in different themes

Nevertheless, there are some novels difficult to distinguish

Why women read more than men?

«In the old times women had more time, but nowadays we are as busy as them. Maybe it´s because we like looking at the introspective and psychological side of the things

As an anecdote, when I go to the book fairs and I asked men who do want me to dedicate the book they always say to their taunt or someone else, they are never for them! (laughing)

However, that is changing. Currently, there are more men in the reading clubs and they participate actively, even more than women, and they are interested in the insides of the book. So still there is hope (laughing again)»

I asked her about happiness:

«First, happiness is like a little blanket that never warms the whole body: if you cover the chest, the feet get uncovered and so on

Second, I have never looked for happiness, it´s not my goal. I´m very ambitious and ambition and happiness work in a different range

In conclusion, the trick of happiness is not looking at the end (a donkey following a carrot in a line), but in the way, what you do to reach that impossible achievement

Then you learn to enjoy the trip, not the prize because the total happiness doesn´t exist. There is always something new on the horizon»

What do you know of Iceland?

«I have never been to Iceland. I looks like a fascinating icy wonderland, like the film Frozen

As well the geysers, the underground hot water that heats the cities