In collaboration with Secret Solstice, the interview was made after the sound check at the venue, with the support of Icelandic Mountain Guides and Iceland Rovers

La Contra Islandia is a project of www.escritorislandia.com by the Spanish writer Jordi Pujolà to put in contact Icelandic and Spanish cultures

HAM Icelandic Band: It looks like they have come out from a Western movie (beards, long hair, black clothes, hats…) and for sure they are the bad guys. I admit I was a bit intimidated before starting the interview (they are very famous and like black humour and irony), but we connected very well and laughed a lot, they are friendly and cool fellows

And the music is just great, especially outdoors, think of Rammstein but in Icelandic

HAM is a legendary Icelandic rock band formed in 1988, they sing in Icelandic and their songs are mostly about betrayal, grief and death, and friendship, love and hate

«…the Icelandic musicians look down on the Eurovision contest…»

They stopped in 1994, and HAM did not perform again until 2001, it was a sort of bet Sigurjón made with the guys: if Rammstein visit Iceland, HAM reunite

What is the most striking of the band for me is the contrast (Iceland is full of contrasts) of the two singers: Sigurjón (glacier) is big, wears on black and has a deep voice; on the other hand,  Óttar (volcano) is light, wears 80´s flashy clothes and has an acute voice

Meaning of HAM in Old Norse

However, Flosi Þorgeirsson told me the name of the band refers to he word «hamur». Basically, it means «skin» but the way we use it, it’s related to an expression that has shamanic references to wearing the skin of an animal, typically wolf or bear, and gaining the strength of that beast. Vera í ham

«Davíð Oddsson  was actually a decent writer, he was a comedian as well, pretty decent comedian (laughs)»

He is an Icelandic musician, writer and producer; show-runner of the famous TV serial Trapped (waiting for second session) (born 1968). This guy is known for his role in the radio duo Tvíhöfði with Jón Gnarr (former major of Reykjavik) and for his part in the popular Icelandic television sketch comedy Fóstbræður

«…mostly who write Eurovision´s songs are more people like doctors, dentists… they are good, very talented people, but they need this extra thing…»

He is an Icelandic musician and politician, he is the current Chairman of the Chief Executive Board of Reykjavik City Council (born 1969)

« …if you choose a certain path, it doesn’t necessarily mean that you have to stay in it for the whole life, you can change directions or take detours…»

He  is an Icelandic musician, actor and politician (former Health Minister, Bright Future 2013-2017) (born 1968). He also was the lead singer of the rock-cabaret band Dr. Spock

He is an Icelandic musician and photographer (born 1971). He also play drums with Apparat Organ quartet

He is an Icelandic musician, historian and guide (born 1968)

Here a few questions to Sigurjón (S) and Björn (B), Arnar was sat with us on the same table and Flosi was around

Icelanders are very competitive and get good results on international competitions, one example is the National Football team. However, despite their high expectations and interest in Eurovision contest (when the show starts, even the local competition, you see deserted streets in Reykjavik and not for volcanoes or earthquakes), the results always bring a lot of frustration and disappointment. Why a country of so fine musicians always fails on it?

S: I think the Eurovision people have fallen intro a trap. The people who go to the songs and to the competition are little close to club, because the other people, the musicians, they look down on the Eurovision contest

B: It´s also the boring. We vote for the same paths, usually the second place is more interesting than the first one…

S: And then we come into the common kind of taste of the nation. I don’t think the average Iceland does have a very good taste on music (laughs)

B: It could be because it´s a compromise… the compromises are not the best way to choose a song

B: It´s a bit like Rob Ford, former major of Toronto, not a very likeable person, nobody in Toronto voted for him, but all the suburbs around voted for him, he was supposed to be the one representing Toronto but he was not their spirit basically

S: But in some other countries, like Sweden, I would say may be the niche is stronger, and there is more respect for the good musicians, you know. Here is not respect among the musicians that they take themselves seriously, so they don’t want to be part of Eurovision; mostly who write Eurovision´s songs are more people like doctors, dentists… they are good, very talented people, but they need this extra thing… 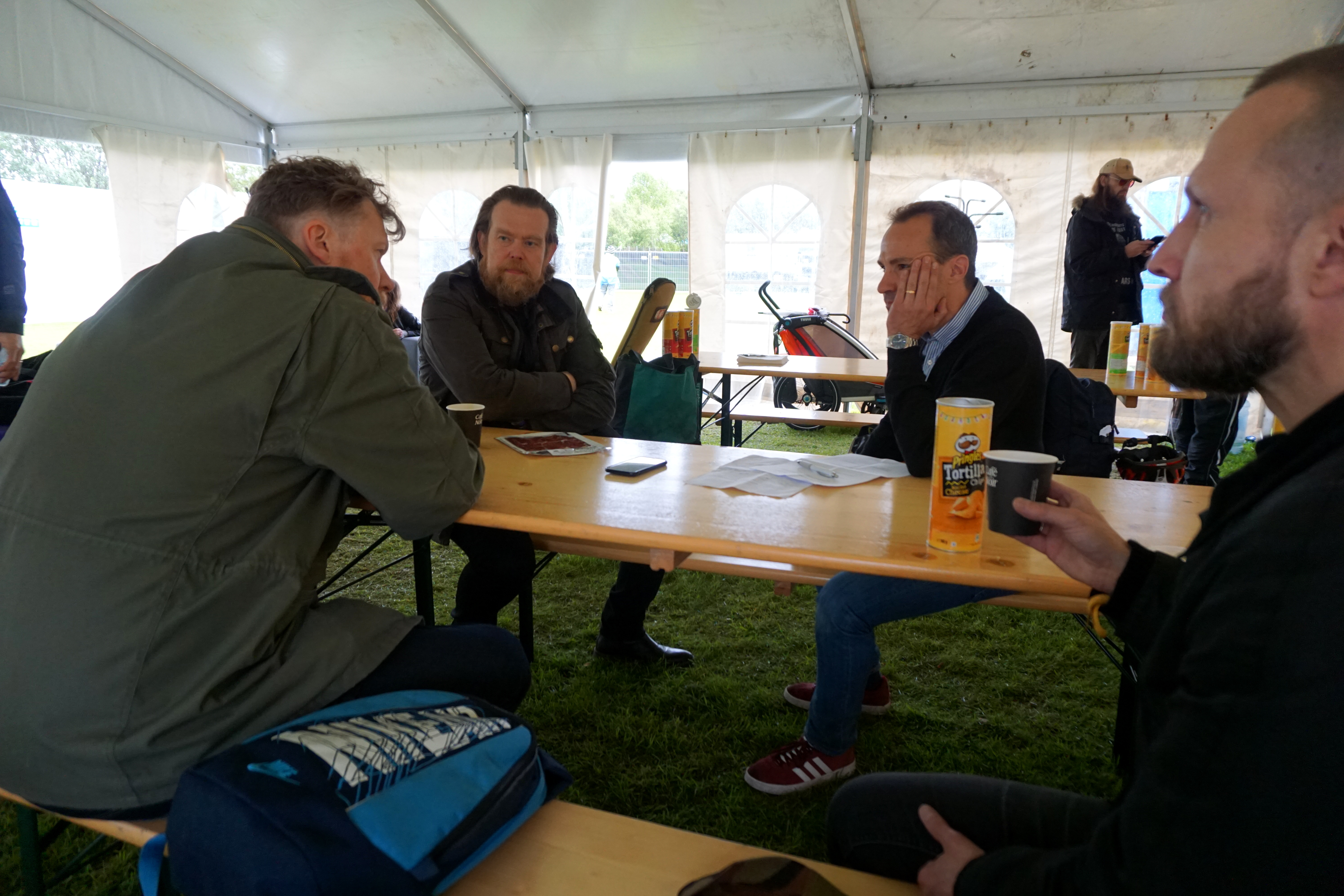 HAM is a very traditional Icelandic band. What do you think of the saying Þetta reddast (don´t worry too much, every thing we´ll be all right). The foreigners living in Iceland criticise Icelanders for avoiding problems just saying  Þetta réttast

B: Worrying about something never fixes the problem

S: I am very much in favour of the West Fiords, I raised in Isafjorður so I go there frequently

B: I like the remote places in the East Iceland, for example Melrakkaslétta

Is this not the place were polar bears arrive from Greenland? (my eyes widened)

B: Well, it´s the land of the blue fox. There is no one there… (laughs)

The components of the band are showmen, actors, politicians… How humour places into the band?

S: There is a lot of irony among us, the guys, because we know each other from so long ago; so we can say everything and those guys might understand me better than other people I met later on my life and irony and black humour place into it

A lot of politicians in Iceland are artists as well (writers, actors, painters…). Why?

S: I don´t think so —Sigurjón frowns for the first time—, just very few politicians, just Björn Óttar, our friend, the writer Jón Gnarr (former Major of Reykjavik), Einar from the Sugar Cubes, he was in the City Committee…

B: It used to be in Iceland that everyone wanted to be a writer, a lot of people actually tried, most of them were quite bad, but some succeeded…

And Davíð Oddsson (controversial former First Minister, mayor and director of the Bank of Iceland during the recession in Iceland)?

B: Davíð Oddsson  was actually a decent writer, he was a comedian as well, pretty decent comedian (laughs); but in general, not a lot of artists basically are going into politics, may be  increasing in the later

S: We also have to taking into account we are only 340.000 people, not many us of us, so may we have many purposes. I know, for instance, Katrín Jakobsdóttir, our First Minister, she is very interested in crime novels, it´s not a ridiculous idea, she might, in the future, take a little different turn and write crime novels

B: If you choose a certain path, it doesn’t necessarily mean that you have to stay in it for the whole life, you can change directions or take detours, actually you should because we need a lot of people, we should have like 5 jobs. We have the freedom of changing opinions because how few we are

I agree, for example in Spain, we are much more conservative

Boredom or fun in the 80´s Reykjavik?

Hallgrímur Helgasson describes tedium in 101 Reykjavik novel but Sjón had a lot of fun. What about you?

B: It was quite different then, but it was a period where a lot of things were coming in, we were seeing more cultures of another nations, people were going abroad more, so the world became bigger, so I would say that the period was a melting pot, not only for the artists,  we kind of believed that everything is possible

What do you know about Spain?

S: I´ve been in Barcelona, by far my favourite place, in Almeria and the typical summer vacation spots

B: I´ve been in Catalonia, Barcelona, Camprodon… great beaches

The most Icelanders love Spanish food

S: Food in Barcelona is great, but somewhere else, in the tourists spots, it sucks. You don’t care about the tourists (laughs)

I guess it happens in all the countries

S: Not in Italy, pizza and pasta are good even in the tourist spots 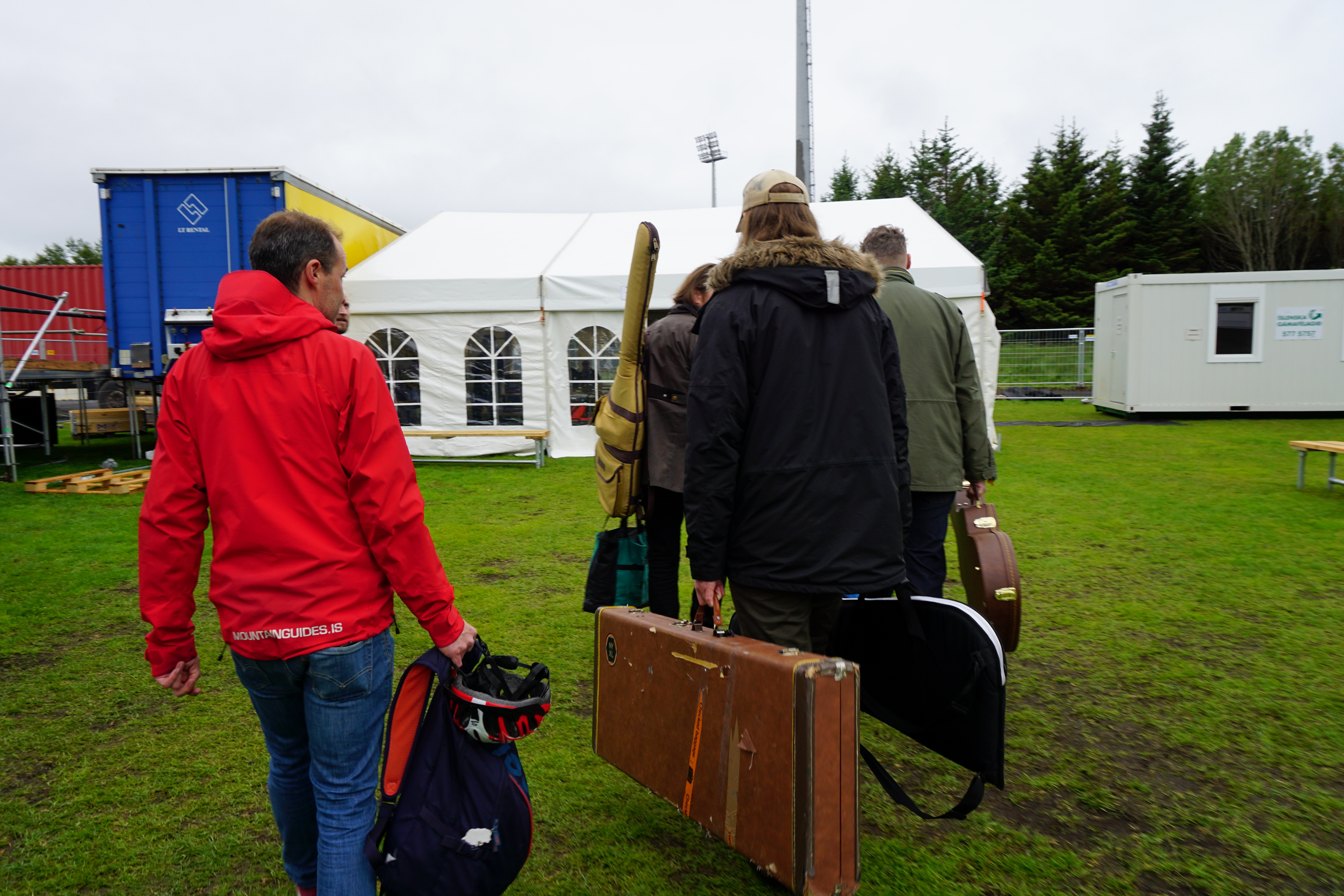